In I Am A Failure (1995), a two-part installation incorporating The Fixing Room and The Room of Fears, Fernandes again invoked the village market as a site from which to draw and to shape place within the exhibition space. To create The Fixing Room he let it be known by vernacular methods such as word of mouth and the classifieds that he was available at the gallery to fix whatever damaged objects or equipment persons would bring to him. Objects such as household appliances, decorative objects, power tools and so on were gathered at the gallery before and during the “fixing” process. His specific terminology is instructive: to fix is a term with a complex multiplicity of meanings. Here, because of its context in a performance work, a work of living art, it has a contradiction which functions as a strategy in Fernandes’ consistent preoccupation with the problem of representation. His use of terminology here is specific: as well as repairing, to fix means also to locate in space or time, to orient oneself by “getting a fix” on a stable point of reference, to place as in to affix, but the primary sense seems to be to secure, in the sense of a representation that in fragmenting an “object” from the flux of time, secures it.

During this extended performance, objects to be “fixed” were attended to and placed on shelves in the exhibition space. “Fixing” was a standard process for each object of whatever origin; each was either wrapped in or was marked on its surface with grey duct tape. In this case the tape’s reparative aspect could be understood in two ways: first as marking and second as binding. These imply aspects of identity formation, the marking which makes something unique, a framing which separates and objectifies, while the binding aspect embodies processes of holding together, of coherence and wholeness. It seems that in this work the marking and the binding are relational: the marking binds identity through difference (if difference in this case is understood as difference between entities) and fixing as securing becomes relative to fixing as difference. 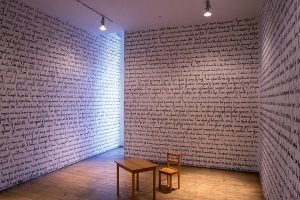 In another room of the gallery Fernandes carried out the Room of Fears. This piece recalls the title of his 1990 exhibition, Walls, where “wall” is simultaneously an principal aspect of the gallery convention and also a metaphor of fear, a boundary or defensive barrier. This theme may also be found in The Fixing Room’s subversion of the fixing/securing whose ultimate objective is avoidance of transience, avoidance of the non-being which pervades every existent:

These and many more handwritten lines cover all the walls, floor to ceiling in the Room of Fears. Otherwise empty except for a single small table and chair, the room becomes an inversion of the uniqueness of each person’s fears, homogenized by quantity and the continuity of the uniform handwriting. The single chair places an individual writer/viewer in the midst of the immense flow of voices. The lines of handwriting, tightly unified by their adherence to the rectilinear confine of each wall, render public and “exterior” the “interiority” of such explicitly psychological material. The solitary situation of self-interrogation, of narcissism is introduced through the location of the single chair and very small table amidst the emptiness of the room. The surface of the walls, if taken as the outside of a body, correspond with the Freudian sense of ego as springing from the surface of the body — a mental projection of the surface of the body. The narcissism of the body with its satisfactions in the fantasies and scenarios of the psyche is here displaced onto the surfaces of the gallery, subverting or “unfixing” the fixed opposition of interior and exterior.

The audience collaborative aspect in these works marks an affinity with the performance/installations of Philippine-born artist David Medalla. In Eskimo Carver (1977), Medalla invited viewers to participate by creating a knife from a pile of debris collected beforehand in the room. Each knife maker was also invited to place their work in the installation, to title and sign their work writing directly on the wall. Although Fernandes’ Fixing Room and Room of Fears also incorporated the collaborative activities of volunteers in a work attempting displacement of his own authorship, it may be that Medalla’s work has gone farther in this direction by recognizing the autonomy of the participants in this dialogical piece.